No Hungarian family’s table is complete without Halászlé

“Wishing you all a very happy Christmas spent with your family and friends. I hope we will reach new successes together in 2022.”

For lunch on December 24th, we have Lenten, meat-free, light foods. Based on an old tradition, each family member breaks down a piece of each dish and puts it on a common plate in the middle of the table. This is known as the “Plate of Poors.” In the old days, this food was then given to poor people.

If there is no poor man in the village, the oldest female member of the family will bury the pieces of food in the garden. If flowers bloom in this area in the spring, they say: “The poors thank you for the donation.”

“Halászlé,” as a traditional dish (translates to Fisherman’s soup), is a hot, bright red soup, prepared with generous amounts of hot paprika and nice slices of catfish or carp. It is a popular celebratory dish, often served during Christmas Eve. Halászlé is a kind of starter for the popular Hungarian Christmas menu. After the soup, the traditional main dish is “Rántott hal” (fried catfish or carp horseshoes breaded with flour, eggs and breadcrumbs) with potato salad. The name of the traditional Christmas cake is “Bejgli,” which is a cake roll filled with sweeten and ground poppy seeds, nuts or marron.

Halászlé was originally prepared by fishermen along the Danube and Tisza rivers, using fresh fish, most often carp, catfish, pike, or perch. Traditionally it has two different types. “Szegedi halászlé” is a velvety, nutritious soup. It looks like a stew, cooked with a puree of mixed, small river fishes, milt and fish roe. Hungarians serve it with fresh bread and hot red or green paprika. The other style of fisherman’s soup is “Bajai halászlé,” which is a clean and weightless soup without any fish puree. This type of soup is served with a special pasta. The fish horseshoes cooked in the soup are served on a separate plate with fresh bread as a main dish. Sometimes Hungarians add some sour cream or lemon juice and/or mustard to Halászlé. But this is another dish – “Raffish fisherman‘s soup” – which is not a part of the traditional Christmas menu.

If it’s not hot enough, put a few slices of fresh, hot paprika on your plate before serving the soup.

What makes Toni so hungry just thinking about it? 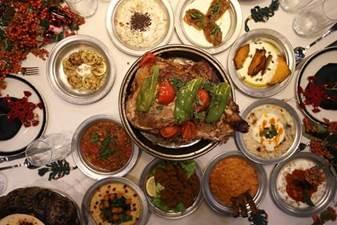 Things to do on New Year’s Eve in Istanbul

To help you using our website by offering customized content or advertising and to anonymously analzye website data, we use the cookies which we share with our social media, advertising, and analytics partners. You can edit the settings within the link "Cookies Settings" and whenever you change it in the footer of the site. See our General Data Protection Policy for more details. Do you agree with the use of cookies?

Provides basic page functionality, the site can not function without them.

Counts traffic to the site and collect anonymous statistics to enable us to better understand your needs and to improve the site continuously.

Collects information to better tailor your ads to your interests, both on and off these websites.